REACH FOUNDATION is a non-profit social voluntary organization working towards heritage conservation and is spreading the awareness between the rural folk, so that the built heritage like temples are not lost forever and are restored in their antique beauty with use of traditional materials. REACH also teaches epigraphy and methods of restoration to interested groups. From this year onwards, REACH

has constituted `HERITAGE CONSERVATION AWARDS’ and it has decided to celebrate this event on every 19th of November, which would coincide with the start of the World heritage week.

On November 19th, 2010, this first of its kind awards function was held at Pitti Thyagarajar Hall, T. Nagar , in the evening hours and the following persons were the recipients of this year’s Heritage Conservation Awards.

Justice Rantavelu Pandiyan is highly regarded for the conservation of thousand year old temple, Gomathi Ambal Sameda Narumpoonadar Swami temple, in his home town Thirupudaimarudur, District Thirunelveli and for resurrection of traditional art and crafts in and around the village. He has brought back the heritage tourism to this tiny village.

Dr.R.Krishnamurthy has contributed much to the Tamil heritage by his discovery of Sangam age inscribed Pandya coin followed by the discovery of all Chola, Chera coins too. His numismatic discovery is a milestone in the annals of heritage studies of the classical Tamil history of the country.

Shri K.K. Mohammed was the first conservation archaeologist to plan and execute the preservation of lost glory of The Bateshwar Group of temples, in Chambal valley remains in Madhya Pradesh. At a time when people were even scared to go to the valley dull of dacoits, he dared enough to lead his team and start conserving the dilapidated temples within the forest. Some 200 temples in 25 acres of land were brought back to its original glory, using the same fallen stone members with a meager budget of 15- 25 lakhs spent for the labour only.

At the start of the function, Oduvar Kudandai Lakshmanan sang the traditional Shaivite hymns from Devaram, which was followed by a scintillating Bharatanatyam performance by Ms. Swarnamalya, having the Meikeerthi of Raja Raja as the basic theme. The theme of Raja Raja Chola's meikeerthi ( names and honours won by the Chola emperor) was chosen to coincide with the 1000th year of the consecration of the Big Temple of Tanjore, built by this great emperor. Then films on the achievements of the awardees followed. The

awards were given by Hon’ble Justice S. Mohan and the felicitation was done by Former CEC, Shri. Gopalaswami. Shri. Ravi Sam, the M.D of Advaita Lakshmi group of Coimbatore, also the Chairman of REACH's academic wing,

A.A.S.A.I welcomed the audience. Good stage management by Ms. Latha Suresh, Natarajan and the Tamil compeering by PG Prabhakaran and the introduction to the awardees in English, by Dr.Chitra Madhavan highlighted the event much better. Chandrasekaran, the PRO of REACH did the powerpoints on Shri. Muhammed's Temple renovation efforts at Bateshwar, as well as the story so far, about REACH's humble beginning till the reach to this D-Day! Shri. Haraiharan, the trustee delivered the vote of thanks.

The small monetary rewards given to the awardees were returned back to REACH by the graceful awardees, to spend the money on REACH's heritage restoration efforts.

The epigraphy teacher for the REACH volunteers, Shri. S. Ramachandran was given a special citation on the occasion.

Some of the VIPs who graced the occassion were Shri. T.S.Sridhar,IAS, Commissioner of TN state Archaeology department, Shri. AVS Raja of the Amudasurabhi, Shri Ram group and former DGP Lakshminarayanan.

The photos are here to see
The article in Tamil vernacular magazine Amudasurabhi and in a temple journal magazine called Sivasundari edited and run by Shri.Atchilingam, a staunch Shiva baktha are posted below: 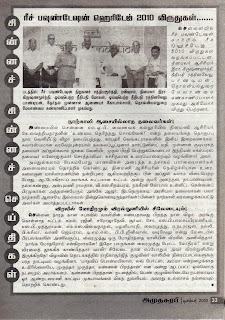 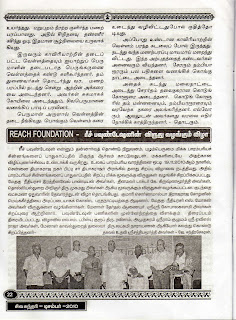 REACH Foundation is happy to invite you for the first of its kind award it has instituted, the Annual Awards for Heritage Conservation. We request you to consider this as our personal invitation to each one you, the proud inheritors of the rich Indian heritage. Please come and grace the occasion and also recommend us any such heritage conservationists who deserve such recognition for the years to come.
Please forward this invitation to all like minded friends and request on our behalf to attend this function and make it a memorable day for us and REACH us. 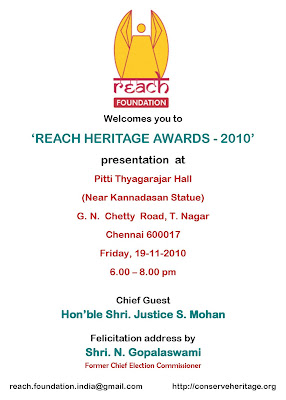 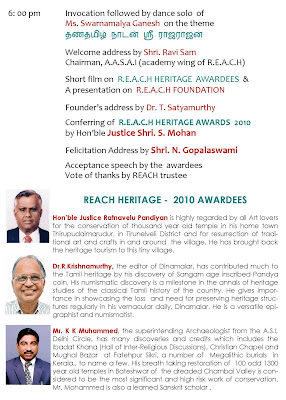 Dr. T. Satyamurthy
Founder trustee,
on behalf of trustees and all members of REACH FOUNDATION