Parasuraman, Sivaram Kannan and Gomathy have expressed already a lot about the trip and the site. Their excellent write ups are given in the link. (Just Click on the tile of this article!) So, let me write less on the trip and more on the facts and figures of this site. Gudiyam lies beyond Even though we picked up a round about route while going up. The route by which we returned is less time consuming. Madan's exquisite photos are here http://www.flickr.com/photos/71032150@N00/
Starting from Chennai towards Poondi, cross the dam and take the road that goes to Place Palayam (that’s the last village on the Andhra-Tamilnadu border) crossing Seettancheri and then Pennalurpettai. Driving following the diversion to the right, you can reach Gudiyam village. At the entrance, there are few huts and houses. The local guy who showed us the way is very passionate about the ancestral value this land has and lamented that none brought this oldest site (one more is in Punjab Sovan valley) to spot light. Dr.T.S also mentioned that there are other smaller caves high up on the hill though we did not visit them. The small muddy path filled throughout with pebbles and cores (bigger than pebbles, round and hard) of quartzite stones greeted us and in the very beginning Mr.Thirumurthy, also from ASI, picked up a small flake tool which had edges as good as a blade. “But most stones”, he said, “are the discarded ones, and the other nearby site, Athirambakkam, contained most of the stone tools intact and we may see some if we are lucky enough”. Then why come to Gudiyam? We can see caves only here but not in Athirambakkam. He explained how the cave man had first tried hunting by throwing the stone on the animals and later came up with the idea of sharp tools and made chopper tools and axes. Later further as his brain started working (?) he thought, “Why the hell should I use so big a stone to kill an animal? And he started using the flakes themselves as sharp tools and spearheads fixed at the split tip of a wooden stick. This actuated the gripping effect and acted as a typical spear!
Mr. Thirmurthy also showed us the pebbles and the tools that were pressed together to form a conglomerate. The conglomerate further got covered by laterite, and now is topped with red mud. Each stage of covering must have taken a few million years! Hence, it is evident that the most ancient caveman had started making and using stone tools!
Now coming back to the walk, we came across a shepherdess wearing a bright red sari, who obliged to guide us to the caves. It was easier to locate her at a distance because of her sari. Bare footed and casually removing the thorns that pricked her all the way, she was faster than our Reebok or slippers clad city-bred crew! She was the first to reach the smaller cave, which was on the left side of the main path. Atop the first cave, is a clear water spring full of water (due to rains?) The shepherdess drank water and asked us to also do so. None dared (gripping tight their mineral water bottles). A few larger rocks have swirls etched on their surface.
Dr.T.S mentioned that the stone while being soft had some worms or snails pacing on it, but when the stone solidified swirl marks wereleft behind! So there before our eyes, lay a very ancient piece of relic, created by nature!
Back down, we trekked further to the big cave. The roof is almost 100 feet tall and 150 feet wide and 100 feet projecting at the front! The pebbles and cores are pressed hard with larvites, making it look like a half bitten laddu studded with dry fruits! The scene was serene and the mood ecstatic! Parrots flew away from the holes on hearing our footsteps! Water drips and oozes from nowhere. Green moss and tiny ferns have captured moist areas. A make shift platform, an Amman photo and few Trishuls make it perfect for a thriller shooting spot! Back on the way, we felt that the path grew longer and longer as the hungry pangs grew good enough to huddle us like an octopus! On the contrary hunger made us walk fast and reach the van before all others to gobble up the curd rice like a one who was possessed!
The facts: Athirambakkam and Gudiyam are part of the excavations by Robert Bruce Put, in 1863. He came back with his friends to explore beyond in all the nearby districts. He declared the site to be almost older than 1 million year and said that these sites looked like a factory for making tools! So he named it as, “Madras factory”! The river Korthalai now running like a small stream is the bed of civilization and the Paalaar and other rivers seen in Kanchipuram districts were all rivulets, which were branching out from Korthalai River! Mankind had lived through ages in these banks, leaving behind the mark of their skill and living styles. Experts opine that these ancestors were named as “homoerectus” as they acted similar to their counterpart in Africa. They must have used stones to make tools good enough to hunt animals, create fire using stone discs, burn firewood and cook meat to eat. And why did they make tools in such a large quantity? May be they supplied to other men as well!
This place had enough raw material to create such tools! It was indeed a RLT - Road Less Travelled, and also a site which might have to wait longer for more people to travel!!! Looking back, the whole past reeled as an unbelievable story! The lush green hill, the stony path, the shepherdess in red, like Goddess Durga, leading the way and the sublime bliss we felt at the caveman site! Standing there, we could realize how small a part we are in this Universe, insignificant in this part of history, as well as the enormous power of nature! We also felt the ‘bliss’ moksha even while keeping our eyes wide open inside the HUGE cave! And by the way, I asked the shepherdess’s name for record sake. Any guess?
It’s Gnanam! 'Gnanam' lead us to sublime bliss! Any takers?
Further more, either click the title of this blog to take you to the complete dedicated web site for this caveman site, or click here again: http://www.geocities.com/uma_parasuraman/Gudiyam_Caves/index.html
Posted by R.E.A.C.H Foundation at 4:59 pm 3 comments:

Twice last few months; we had visited Uttaramerur (as spelt by Kalaimamani Dr.Nagaswamy, retired-Director of Tamil Nadu state Archeaology Dept. Most write up is diligently reproduced from his book, Uttaramerur which gives a full detailed information on the temples, history, the stone inscriptions, the people, etc.) And were fascinated by the Grandeur and splendor of the town (village?) This place, a historically important site, has beautiful pieces of history with it, intact, some lost and some trying to regain glory.

1) Sundaravaradha temple (a model for our Ashtalakshmi temple in Besant Nagar) whose statues are made of lime mortar and stands against time till today, walls adorning great natural colored paintings, as well as

2) The Kailasanathar Temple (which is in ruins and our REACH team has started the renovation work!!!) – with the help of the Sundaravaradha Temple trustee, Mr.Seshadri and his team's efforts) were almost built immediately. 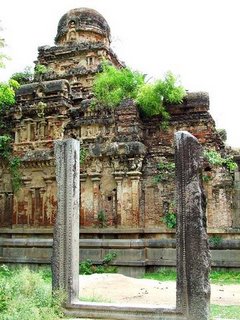 3) Also a stand out is the Vishnu temple, near the current bus stand. This temple is now under the ASI maintenance.

The highlights of the rules are briefed here:

The nominees' names written on a pre-designed palm leaf and drop in the common pot (Kodavolai in Tamil). On the election day, amidst all seniors, officials and common public, the oldest priest of the temple selects few from the pot randomly and transfers the content into another pot. From this, one name is picked by a small boy amidst the crowd, who does know what the contents of the pot are! This is read out by the chief election officer and thus agreed upon. So goes the full lelection for various heads, committees etc.

The nominee should fulfill the following criteria:

-He must own more than a quarter veli of tax paying land
-He must live in ahouse built in his own site
-His age must be below 70 and above 35
-He must know the rules and the intricacies of the law (Mantra-prahmaana) and be capable of explaining it to his people
-If the nominee has just 1/8 th of the stipulated land, then also he is eligible if, he has learnt the veda, and one of the four bhashyas (commentaries) and be able to explain to others.

Among those who possess the foregoing qualifications:

-Only those who are well conversant with the business and running affairs will be taken and
-One who possess honest earnings, whose mind is pure and who has not been on any of the committeesfor the last three years shall also be chosen.

-One who has been in any of the committees but has not submitted the accounts, or one who has accepted bribe in any form and all his relations, specified below, shall not have their names written on the pot-tickets (contestants).
-The sons of the younger and elder sisters of his mother
-The sons of his paternal brother of his mother
-The Uterine brother of his father
-His Uterine brother
-His father in law
-The husband of his uterine sister
-the sons of his uterine sister
-the son-in-law who had married his daugther
-His father
-His son
-One against whom incest (agamyagamana) or the first four of the five great sins are recorded;
-
All his relations above specified shall not contest after one stands for election in the same given year.

And further disqualifications are:

All these thus specified shall not dare to commit suicide after elections, those who have their names written on the pot-ticket for any of the committees.

Further there had been committees for all activites like tank and water management, accounts authority, CBI, and what not those found guilty at the time of being in ower are removed immediately, if there bad deed comes to light!

And so goes this fullbook, authored by Dr.Nagaswamy in his bilingual book (Tamil & English) UTTARAMERUR. Also mentioned in the book arethe various other temples in the nearby vicinity, there importance, the street names having gods and goddess names, the various educational trusts, the social activity, festivals and so on. The book is available at all leading book stores as well as in front of the Sundara Varadhar Temple at Uttaramerur.

One who reads this can only sigh a deep breadth as the nostalgia is infectious! We really yearn to go back in the time machine to really live in such a great city UTTARAMERUR. Uttaramerur is just an hgours drive from Chennai by car, near Chengulput and the temple renovation work of the Kailasanathar temple will soon start with the guidance of REACH founding members.
Posted by R.E.A.C.H Foundation at 8:31 am 7 comments: